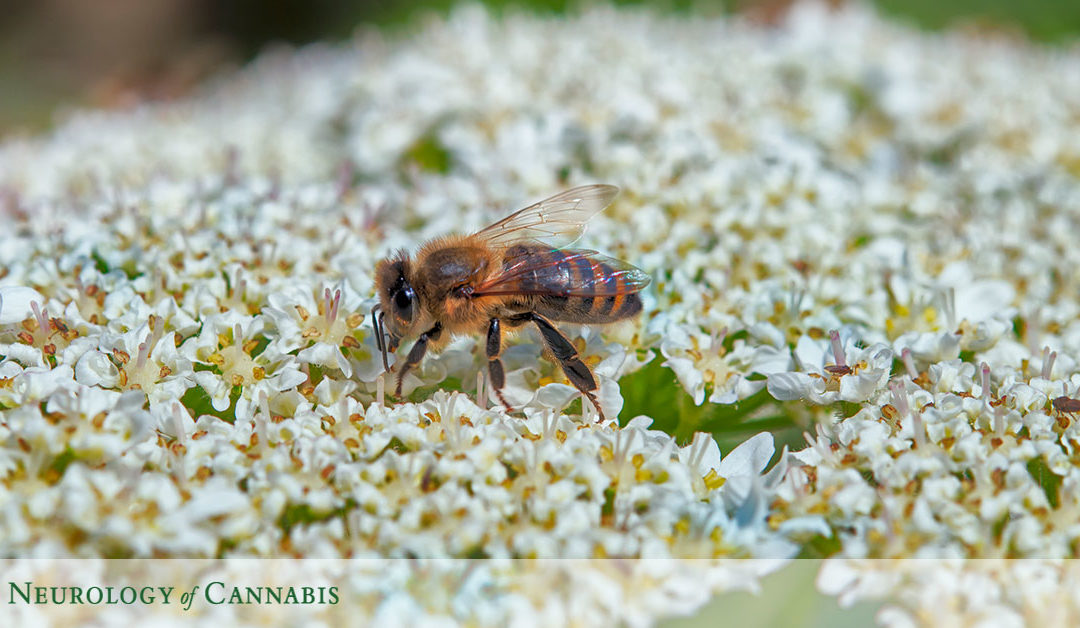 Bees play an essential role in our global ecosystems, with a third of our food supply dependent on their pollination efforts. Since the mid-1990s, however, beekeepers around the world have reported a disturbing decline in the honeybee population, warning of dire results if the trend continued. Pollinators are critical to food production, and hand-pollination is too labor-intensive and expensive to be considered a viable alternative.

The loss of the bees is blamed on a loss of natural habitat, and the prolific use of pesticides worldwide.

Quick Fact: The United States has seen a 40% decline in the honeybee population over the last 20 years.  Proposed alternatives have been few and far between.

The Plight of the Honeybee and Hemp Production

The legalization of medical cannabis in 35 states over the last few years has allowed for hemp farms to spring up all across the country. According to early studies, the hemp crop seems to be providing an unexpected benefit to the stressed honeybee population, which is collecting hemp pollen as a food source.

Because hemp pollen is abundant during the late summer months, bees can stay well-fed after other plants and flowers have stopped producing pollen. This ability to find food may greatly assist in keeping the bees healthy and supporting their population rebound. As medical cannabis and recreational marijuana laws become more common, hemp farms will only continue to grow. The bees will have a substantial source of food over the long term, giving them the best chance we have seen in a decade. Although hemp does not produce nectar, it does provide the bees with the pollen they need to feed their young, obviously critical to the next generations.

The Research: Colton O’Brien, a student at Colorado State University, showed that representatives of 23 bee species found in Colorado were caught in traps in the hemp fields. The experiment took place over a period of one month. O’Brien says that he began the study after walking through the fields and noticing a constant buzzing. Realizing that the bees were all over the hemp flowers from late July into September, when other flowers were had finished blooming.

As O’Brien’s report stated,” hemp becomes a valuable pollen source for foraging bees, giving it the potential to have strong ecological value.”

The Hemp Industry is Benefitting as Well

Four years ago, a French beekeeper named Nicholas Trainer cultivated bees that made honey utilizing the resin from the cannabis plant. The beekeeper and marijuana advocate had treated hyperactivity with medical marijuana since childhood, and the possibility of combining the benefits of honey with the benefits of cannabis was intriguing.

Over time, the bees began utilizing cannabis resin in the production of their honey. Trainer suspects the “cannahoney” is an even more powerful treatment than many marijuana-based therapies.  “Everything that passes through the body of a bee is improved,” he told the Science Explorer in a recent interview.

The honey is not like other products that are infused with CBD. Instead, the cannabinoidal benefits are naturally inherent in the honey, and it needs no additional infusion once produced. The cannahoney offers the same pain, insomnia, and anxiety relief of medical cannabis without any intoxicating effects.

The possibility of solving two seemingly unrelated problems – the opioid crisis and the declining bee population – with hemp and cannabis production is a captivating thought. As cannabis research and acceptance continues to move forward, experts hope to find that we have only just begun to understand the many benefits of the plant.

Dr. Daniel P. Stein is a medical cannabis expert in Sarasota. His practice, the Neurology of Cannabis, is on the cutting edge of cannabis treatments and therapies. If you would like help in determining if medical cannabis is right for you, call today for a free consultation.